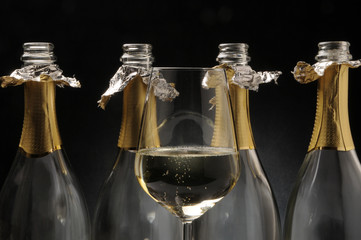 Luxury, celebrations, how is Champagne made ?

Refreshing and sparkling – Champagne is the synonym for luxury and French celebrations!

Did you know that only a sparkling wine?  Whose grapes were cultivated, harvested by hand and vinified in the region of Champagne? Can rightly claim to have originated from this appellation?

The region of Champagne is slightly hilly and one of the most northern wine regions of the world. The soil there is rich in clay and silt and the climate is rather fresh. Those environmental conditions allow the grapes to mature slowly, which gives the beverage its freshness and finesse. The Chardonnay, Pinot Noir and Pinot Munier are the grapes that are mainly found in that region.
The majority of wine makers who work in this region. Approximately 18,000 sell their harvests to great champagne houses or to cooperatives, but today, more and more wine makers are vinifying and producing their own specialities themselves.
Or in other words : There are more than 18,000 wine makers, who sell their harvests to great champagne houses. But there are also more and more wine makers, who vinify and produce their own specialities themselves.
The legislation demands the exclusive usage of the so-called Champenoise method in order to obtain a certificate. Which means that the second fermentation, so the maturation by yeast, takes place in the bottle.

Discover the champenoise method with Winetourbooking

What is the Champenoise method?

After the harvest, the grapes have to be pressed still on the same evening. That is the most delicate step of the Champenoise method. One has to gain a juice that is as natural as possible before it oxidises. And changes its colour as soon as it comes into contact with air. Within 15 minutes, the grapes are filled into the winepresses, in which they press themselves naturally by their weight and their mass.

Approximately seven months later, the cellarers introduce the second step of the Champenoise method. This is the most decisive step of the champagne production, the so-called “foam development”. That is the phase of transformation, which enables a non-sparkling wine to become a sparkling one. The secret of this transformation lies in a complex mixture of wine, sugar and yeast, which is also called “tirage liqueur”. The yeast is absorbed by the sugar, which creates carbon dioxide, which creates small bubbles. A wrong dosage could risk that the bottles explode during the second fermentation.

Afterwards, the tirage liqueur is added to the entire annual production. Approximately a few ten centilitres per tank (depending on its capacity)is used. The foam development continues for another three months and afterwards, the champagne rests for several years.

Can you enjoy champagne just for aperitif or dessert?